NO EASY PATH TO GLORY

“It takes a little courage, and a little self control and grim determination, if you want to reach a goal. It takes a great deal of striving, a firm and a stern set chin. No matter what the battle is if you are really out to win.”

Life is not just a smooth road where every step is an easy one and every goal attainable without much trouble. Anything worthwhile is difficult to attain and the same stands for success. It requires a great deal of grit, determination and courage to reach the much-coveted peak. Successful people, when asked the secret of their success, invariably answer ‘hard work’.

A number of things distinguish the winner from the looser. At the beginning there are many contenders, but slowly the hardships of their chosen path take its toll and at the end it’s the one who overcomes the stumbling blocks, reaches the winning post. Troubles and problems are challenges to be faced, not blocks to be feared.

As a Russian proverb puts it “The hammer shatters glasses, but forges steel”. So it all comes down to what one is made up of. Do you give up when trouble comes calling or do they further strengthen your resolve to succeed? Do you wither in the face of adversity or does some strength comes to your rescue?

Do you dream of being part of achievers? Because only when there is a longing deep inside which is so intense, you feel it pulsating every moment of the day; a fire so bright, it lights your way miles ahead, so hot it can’t be quenched unless doused by success, can you think of performing the unthinkable. Aim at the impossible, at the heights which make you dizzy and leave no room for surrender in your life, and then success will be ‘fait accompli’.
Source-Priyanka Menghani.
Posted by ENLIGHTENED MIND at 5:39 AM No comments:

BIDDING ADIEU
The time that I feared the most,
Has come to haunt me like a ghost.
It’s time when I have to bid adieu,
to a wonderful person like you.
Being with you was my fate
but leaving you is what I hate....

If I had the power
I would love to have another shower
of your love and care....
To this gift of time I bleed,
trying to savor everything before I leave.
The laughs which we had,
on topics which were mad.
The fights that we fought,
on things that we bought.
The fun of others which we made, though not write
was an icing on the cake....
These are only some of the stories
of our bucket full of memories.

I’m trying to find the power,
To stop the clock of God’s tower.
But all my efforts are in vain,
as time plays its own game....
One thing we promise
that there will be no water from our eyes
as we are moved by our lives.....
My heart now for others has a little less space,
as it is already covered by your face.
I finally leave this place with a faith,
that we will be friends till our lives have their permanent breaks……

-Srijan Sehgal
Posted by ENLIGHTENED MIND at 12:16 PM No comments:

Want to live happier, read this... 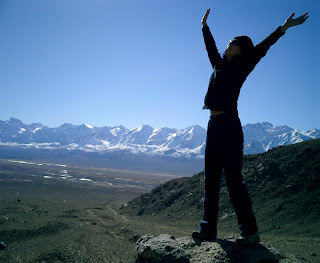 WHY ONLY INDIANS ARE RECARNATED!

The angel Gabriel came to the Lord and said 'I have to talk to you. We have some Indians up here in heaven and they are causing problems. They're swinging on the pearly gates, my horn is missing, they are wearing Dolce and Gabana saris instead of their white robes, they are riding Mercedes and BMW's instead of the chariots, and they're selling their halos to people for discounted prices. They refuse to keep the stairway to Heaven clear, since they keep crouching down midway eating samosas and drinking chai (tea). Some of them are even walking around with just one wing!'The Lord said, 'Indians are Indians. Heaven is home to all my children. If you want to know about real problems, give Satan a call.'

Satan answered the phone, 'Hello? Damn, hold on a minute.' Satan returned to the phone, 'OK I'm back. What can I do for you?'Gabriel replied, 'I just wanted to know what kind of problems you're having down there.'Satan says, 'Hold on again. I need to check on something.'After about 5 minutes Satan returns to the phone and said, 'I'm back. Now what was the question?'Gabriel said, 'What kind of problems are you having down there?'

Satan says, 'Man I don't believe this .. Hold on.'This time Satan was gone at least 15 minutes. He returned and said, "I'm sorry Gabriel, I can't talk right now.. These Indians are trying to install air conditioning and making hell a comfortable place to live in by putting out the fire..fire is there to keep them uncomfortably hot!! Since they are so tech savvy, they were trying to start a telephone and IIT connection between heaven and hell between ME and GOD. I am having such a hard time controlling and dealing with them!! Some were trying to start a chai - pakora, Chole batura, channa, Dosa and samosa, barfi, Chakli and Dokla (Indian snacks) shop, which I had to stop..I am requesting you OH LORD PLEASE send them back to earth as soon as they arrive for re-birth".
So this is the story why Indians are the only ones that are re-born!!!
Posted by ENLIGHTENED MIND at 8:51 AM No comments:

I have principle and no power
You have power and no principle
You being you
And I being I
Compromise is out of the question
So let the battle begin...

I have truth and no force
You have force and no truth
You being you
And I being I
Compromise is out of the question
So let the battle begin...

- Bhuchung Sonam, an alumnus of M.S. University, Baroda
Posted by ENLIGHTENED MIND at 8:56 PM No comments:

"RELATIONS"-probably the most important word for anyone in this world.These relations are the ones which are truly ours in this challenging environment.These are the ones which we can look up to at times of joys and sorrows.But why these disappearing today???

India got indepence in 1947 from Britishers and from then on we have moved forward to a great extent.To get independence MAHATMA GANDHI emphasised on Hindu-muslim unity.

But the unity which I am going to talk about is at a very small scale.The unity between the family members.Well many people would think me stupid to talk about this topic because it is understood that there would be unity and love amongst various members of a family.But if it is really prevelant than can anyone tell me why the trend of joint families is vanishing and nuclear families is coming up,why there are old age homes if everyone loves and respects their parents,why do brothers get away from each other in their blind greed for money???Does anyone have an answer?

Well I dont really know the reason for this but the people which do not understand the importance of these relationships need to sit down,have a small drink and then think cooly that what are they GAINING and what are they LOOSING
Posted by ENLIGHTENED MIND at 2:45 AM 1 comment:

Well this is my first blog and I pray to god that this is succesful
The topic which i have choosen for my first blog is "EDUCATION"
Education - well it is needless to speak on the importance of this topic.If we see around a world map,the countries which we would call developed have a higher percentage of their population as educated.Even after 62 years of inependence "INDIA"-OUR MOTHERLAND is still called a developing country mainly because more than half of our population is uneducated.

Well, there's a huge difference between the words "Education" and "Literacy" which most people think to be similar.From my opinion to be Literate is when a person can read or write any language,whereas Education is an all round development of the personality.That is where the problem lies.In INDIA,people are still literate but they are not educated.The reason for this is both the thinking of our people plus our so very respected Government policies.

The government of India also has played a role of a "destroyer" and a "preserver".Yes it has been setting up scools with many feature like "MID -DAY MEALS" etc.But only setting up of schools is not the main thing.The main thing is to mantain those.No standard teachers,discipline in a disarray etc. etc.Students come,enjoy and go.Also if students get some learningin their prelimnary stage,they do not have any further method to continue study.From more than 50 years no Indian university has been set up by the Indian government.

What can be done for "Education for all" are awarness campaigns,setting up of standard institutions and schools and trying to forge people to get education.The people can be trained with the importance and benefits of education.The government of India instead of wasting money on needless issues should invest more on education for all.

Hope everyone in our country gets educated and our country -INDIA prospers.
Posted by ENLIGHTENED MIND at 6:13 AM 1 comment: